If you were a child of the 90’s, you probably have great memories of sitting in front of the family computer and play Rollercoaster Tycoon.  Spending hours on end creating the greatest theme park, making sure that the benches were close enough outside of Corkscrew Roller-coaster 1 because it was pretty intense and everybody always pukes afterward.  Maybe you were like me and created an amazing roller-coaster that NO ONE WOULD RIDE BECAUSE THEY ARE THE WORST GUESTS IN THE WORLD AND IT’S NOT EVEN THAT SCARY JUST GET ON IT DAMN IT.

When I heard a Rollercoaster Tycoon branded came was coming to PS4 I was pretty amped.  Within minutes of booting up and playing I realized that the brand has splintered since last I played.  RCT: J is a pretty good rollercoaster simulator.  They have added VR capability to feel like you are actually riding the coaster you’ve created.  Let’s get in to it. 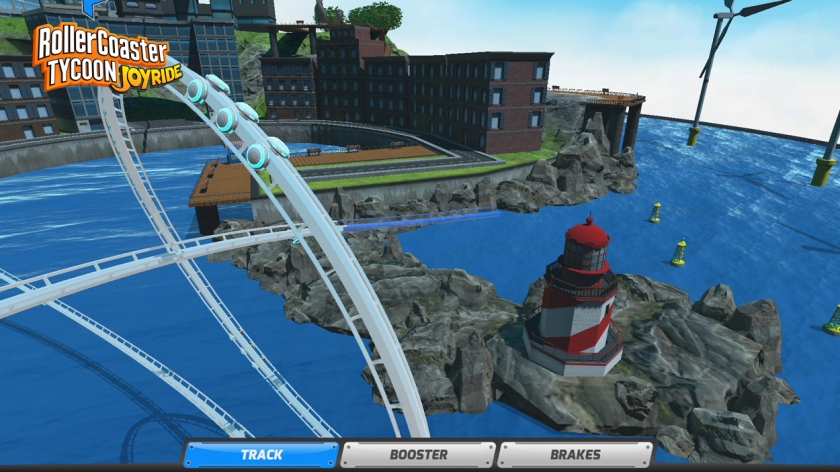 The first thing you will notice is the complete absence of music.  There is no ambient music in the background of the menu or once you get into the actual game.  Eerie silence fills the level as you clip together pieces of track.  The menu is pretty straight forward and allows you to jump right into the creating.  You can go through mission mode that gives you three goals to achieve that vary from adding boosters, to creating and then editing your track.  There is also the self explanatory sandbox mode.

The plus side of the coaster building, is that you are no longer held back by money or guests.  You’re building to create a sick coaster that you’re going to ride.  If you want 4 loops and 7 corkscrews, do it.  Just know you will have to ride it, and with the newly implemented “mini game” you’ll have to earn points.  As you ride through, in a very similar style of the Buzz Lightyear ride in Disney, you are armed with a blaster and are tasked with shooting different colored balls and gems from around the track.  This is totally something made for VR as trying to use the controllers motion sense tracking comes off clunky and misaligned. In order to earn the platinum trophy you will have to have a nearly perfect run with this, so this is nowhere near an easy trophy hunt.

If roller-coasters are your jam and you want to create something that will make you puke in VR, for under $30, you can’t go wrong.  If you’re looking for a full RCT game keep moving.  Otherwise the pitfalls overshadow the good.  Again the lack of bgm is killer as you are tasked to spend some time building a coaster in complete silence and it becomes unnerving.

@myshiftkeyisbroke @isohpod idk about the change GTA is making. At least game pro got hands on it. #gta #grandtheftauto
We’re going live in 2022. Team Frankenculture coming in with the streams and even if it’s not perfect we want to give you some content. #rainbow6siege #twitch #twitchstreamer #videogames #surprisemotherfucker #igotscared #pcgaming #imnewtothis
Frankenculture Episode 117- GTA TT TDE issues, Animal Crossing and COD
What a good day for a convention. #lasvegas #unicon #fandom #comics #toys #games #cosplay
Right in the feels
Life’s been pretty busy recently but here soon team Frankenculture will be back to streaming for you all. Hopefully you didn’t forget about us. #twitch #facebookgaming #youtube #videogames #clips #pubg #xboxseriesx #xbox #consolegaming