Welcome back, readers and writers! This issue of What’s Spinning Me, I keep the good vibes going and stay in the genre of strong female pop music. That being said, Jade, Jessie, Leigh-Anne and Perrie bring the fire the again, for the fifth time with album LM5! Join me on this pop journey through the UK’s hottest new record by the impeccable girl group Little Mix! 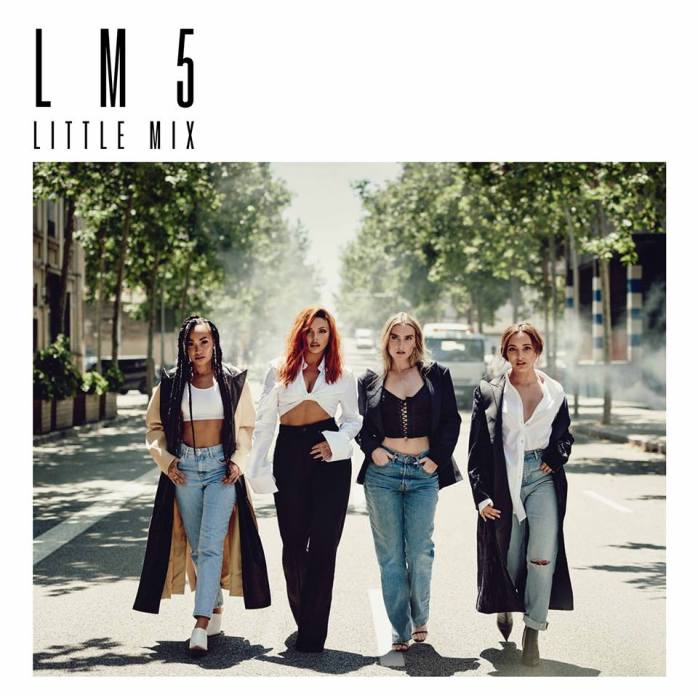 Some would call Little Mix the Millennials’ Spice Girls. Very fitting, since everyone who experienced the phenomenon that was the Spice Girls in the late 90’s vibes to Little Mix!They are a powerful British all female pop group from the UK, who write killer pop tunes that are catchy, thought riddled, emotional at times, and packed with positive vibes. LM5 is no exception when brought up in the current Pop music scene, the album is filled with the aforementioned. LM5, is Little Mix’s newest release since 2016’s album Glory Days.

The Pop veterans released LM5 back in November on the 16th, on record labels RCA UK and Colombia Records. LM5 was released with lead singles; Woman Like Me ft. Nicki Minaj, Joan Of Arc, Told You So, The Cure, More Than Words, and Strip. The album features 14 tracks and notable features like Nicki Minaj, Kamille, and Sharaya J. The lyrical themes for LM5, include women empowerment, self reflection, and of course trials and tribulations about love and relationships. Little Mix brought a more mature sound this time around, a lot less fizzy pop, a lot more grown woman. Though their sound has matured at album five, you can most definitely tell that they are still the same Little Mix, from circa 2011, who also won the UK’s The X Factor, the first group to take the title.

Little Mix will be hitting the road in Fall 2019 for a headline UK tour named LM5 The Tour, that will run from early October and on through until Thanksgiving. No U.S. tour has been announced but surely, there will be one to come. Here in the past four years Little Mix has been creating massive fan base that expands world-wide. Little Mix has been full steam ahead for five albums now and it seems there will be no stopping these British ladies anytime soon. Little Mix has set the bar high as it pertains to group pop music, they have outdone every album before. Little Mix’s relevancy will always be prevalent, always bringing fresh sounds and contagious good vibes, setting themselves apart from the rest and being “Top Of The Mountain” as it pertains to Pop music. LM5 is just the first chapter of the new era of Little Mix.

I discovered Little Mix at a Best Buy in Midland, Texas around late 2013. I randomly found their 2012 debut album DNA, and I bought it based off how the cover looked, never heard a single song until I popped the cd into my laptop that day. Since that fateful day in 2013, I have been hooked on Little Mix like a junkie hooked on crack. Little Mix fulfilled that empty space in my music library, pop music. I really wasn’t digging what kind of pop music was floating around at that time, well, with the exception of Katy Perry and Lady Gaga. Still, something felt missing and that was having a current fresh girl group to listen to.

Then Little Mix came along and changed it all. I felt like I hit the jackpot, essentially discovering the love monster child of three popular female groups; Spice Girls, En Vogue, and Destiny’s Child.

Now, my favorite part of Little Mix, is that they write their own music, which is very rare to find in pop music. Well, at one point it was like here, we wrote these songs now go in the vocal booth and sing the songs. Here in 2018 a lot of current pop artists write their own material, which is very refreshing, Pop music needs it. I am a huge fan of Little Mix’s lyrics, every record, these four ladies seem to step up their lyrical game and melodies. Two lyrics I love a lot on this record, one being from the song Monster In Me. Beautiful creatures, you and me/ Every time we touch it’s dangerous, this spark is more than chemistry/ Beautiful liars, drownin’ deep/ Every night we fight and it’s hard like hell but it feel like heaven between the sheets. The second lyric worth mentioning is from the song Wasabi. Stick like toffee, sip like coffee/ Wake up, change your mind, and drop me/ Love to hate me, crazy, shady, spit me out like hot wasabi/ Lick me up, I’m sweet and salty, mix it up and down my body/ Love to hate me, praise me, shame me/ Either way, you talk about me. I mean you got admire how sassy these ladies came at you, lyric wise. My favorite songs on this album are; Monster In Me, Wasabi, Joan Of Arc, Love A Girl Right, and Notice. LM5 is my favorite Pop record of 2018, with BLACKPINK’s BLACKPINK IN YOUR AREA (What’s Spinning Me #11: BLACKPINK) as close second. This album, symbolically and ironically gets five out of five spins. Top score because every album is better than the one released before. Little Mix keeps upping their game and it’s amazing to be a fan of such a talented group of ladies. Y’all be sure to give this album a listen and maybe even go back and listen to some of their older albums like Get Weird and Salute, which are both phenomenal and are perfect glimpse of years past. Little Mix in 2018 still embody the Katy Perry lyrics, Fine, Fresh, Fierce, we got it on lock. Minus the California. Make way for the four queen of hearts, making mad music like a couple Joan of Arcs.