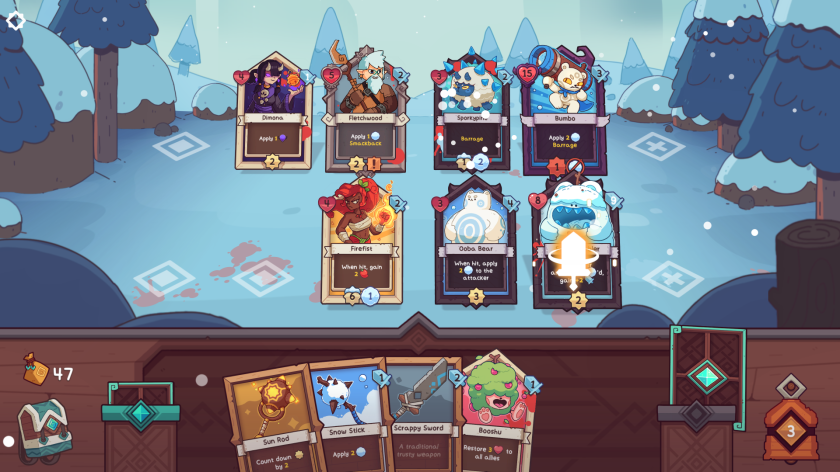 London, UK – 22 September 2022. Chucklefish today announced the upcoming deck-building, roguelike adventure, Wildfrost, will be playable during October’s Steam Next Fest 2022, taking place from 3-10 October. Available in English, Chinese (Traditional and Simplified), Japanese, and Korean, the Wildfrost demo will feature a slice of what’s to come in the complete game which is slated to release this Winter. Players can get hands-on with the Snowdweller Tribe; three battles per run with six possible mini-bosses and a frosty final boss! There are also 23 cute companions to collect and 45 glacial items and clunkers to experiment with.

In Wildfrost, players will build their card deck of charming companions and powerful elemental items in an attempt to take back a world that has fallen to the Wildfrost. Only the small civilisation of Snowdwell and its survivors remain as the final stronghold against an eternal winter. Use strategy and card-building skills to reach the Sun Temple and banish the Wildfrost once and for all!

Throughout the game, players will have the chance to recruit new card companions and gift them charms to enhance their powers. Return to Snowdwell after each run and rebuild the town, unlock more cards and encounter new challenges and events for an adventure that has endless replayability.

Play Wildfrost’sdemo in all its’ glacial glory in the Steam Next Fest 2022 from 3 October to 10 October and wishlist now. Wildfrost will launch this Winter on PC and Nintendo Switch.