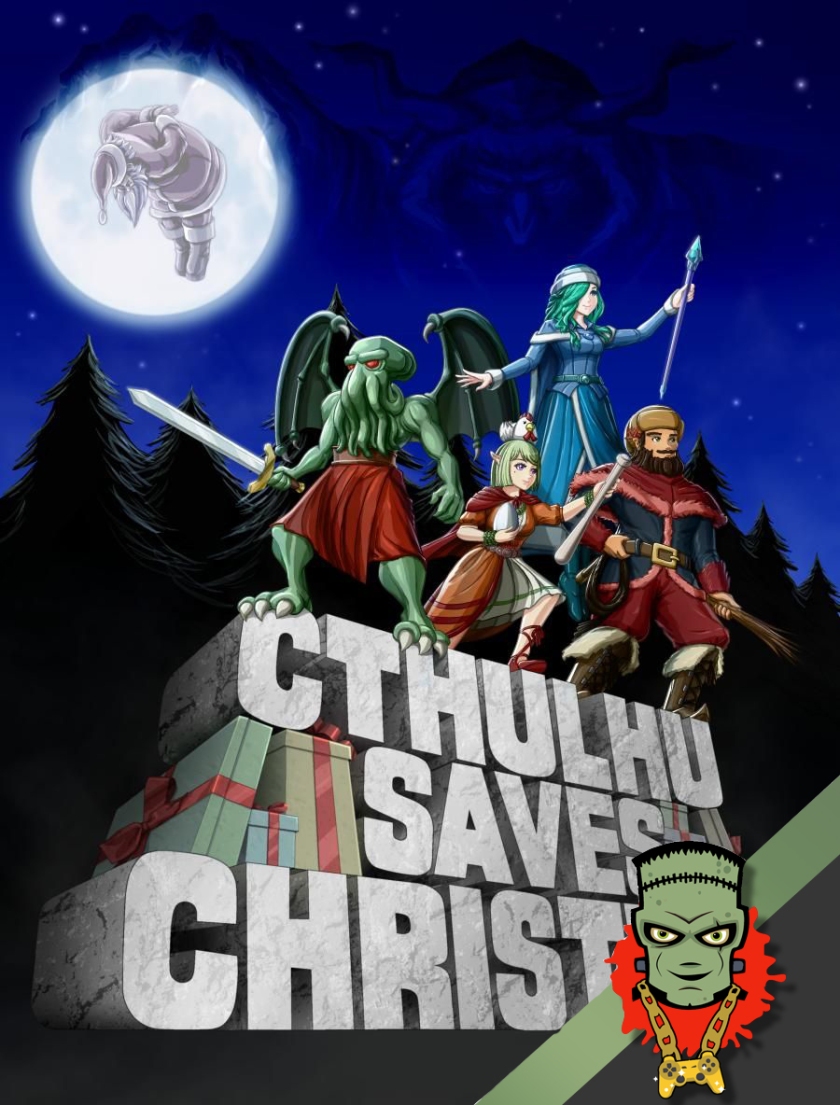 As October comes to a close and we enter November, we are reminded that Christmas and the titular Santa Claus will soon be here. Or will he? It seems old St.Nick has been kidnapped, and the only one that can save him is one of the most terrifying creatures known to man, CTHULHU!

In Cthulhu Saves Christmas, you take control of the aforementioned Cthulhu. For those not privy to who Cthulhu is, basically a Human/Octopus/Clawed/Dragon creation from H.P. Lovecraft. If you’ve ever been to a comic con, you usually can’t go to too many booths without seeing some sort of iteration of Cthulhu, I believe I had a pair of slippers with his face on them at one time. Cthulhu isn’t a hero though, quite the opposite. Cthulhu is said to be the ender of worlds, and to drive anyone within his gaze to INSANITY! So why does he want to save Santa, let alone Christmas? Someone stole his powers, and he is nothing without them.

Getting into the game is fairly easy, as it’s set up like a typical JPRG. The 16-bit graphics lend itself well to this game style as I felt like I was playing games from my youth. As you leave your cave to find out what happened to your powers, you meet Crystal, his grand daughter. You find out Santa has been kidnapped by the League of Christmas Evil (consisting of different characters of Christmas lore) and you must destroy them to save him! Along the way you pick up two more teammates, Baba Yaga (straight from the MST3k Classic, “Jack Frost”) and Belsnickel (some hilarious dialogue ensues when he is introduced revolving around a special appearance in a Dunder Mifflin Documentary).

You defeat the first member of the LoCE, Jack Frost, fairly easily. Which brings you to the North Pole when you go through and forge R’lyehtionships. After each dungeon and boss battle you will have four opportunities to hang out with your party members, gather new and stronger gear, or meet all new people (including a weirdo at the cemetery). The writing really shines during these vignettes, it’s witty, smart and doesn’t take itself too seriously. Some of the funniest lines come from the back and forth with the narrator infact. After you visit the town you get another lead on a LoCE member and go to another dungeon to take them out.

The level design, while simple is beautiful, with backgrounds that would fit in a Rankin/Bass special. The enemy designs are also amazing, with a JRPG feel mixed with an island of misfit toys twist. The LoCE member design keeps this going as well, with the Rat King from the Nutcracker creating a mech suit to attack you. The battle sequences are easy to understand and get through. I played through on medium, and once you get a good rhythm, you start steam rolling enemies. Only later in the game did I ever start healing my team, and not until the final two battles did I use items. I did however use the combination moves every single battle, this combines two powers from different team mates to either attack the enemies, heal, or give a buff to your party.

The game itself isn’t insanely long, I completed it in just two sittings. That’s fine though, as it doesn’t overstay its welcome, and once you beat it once, that opens up New Game+, which will give new cutscenes and dialogue between your party mates, Cthulhu and even the narrator. This game is perfect for an Extra Life stream, or even a regular stream (but make sure to donate to extra life)

Gameplay: 9/10 Fun and intuitive, if you’ve played an JRPG you’ll be at home here.

Sound Design: 8.5/10 The soundtrack while sometimes repetitive is still catchy and fun.

Control: 10/10 I never found myself searching for the correct button to press, everything was very intuitive and smooth.