Sometimes A Game Surprises You

For a couple of us here at Frankenculture that game is ARK: Survival Evolved.  I play a lot of shooters but there is a huge soft spot in my heart for survival games, city builders, and crafting games.  Then compliments of the developers they managed to combine all of those sweet game elements and then added dinosaurs! Who doesn’t love dinosaurs??!! 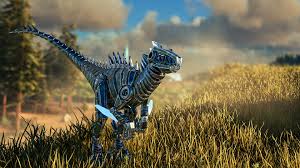 ARK starts you as a player naked on an island surrounded by many of dinosaurs, fish, birds and other animals and you’re immediately forced to start your survival as you need to eat, drink, keep warm or don’t get too cold, you use your fists to mine the basics of rocks, wood and thatch once you get those three items you can start crafting tools, clothes and shelter and then the game takes off.  As you level up and see all of the things you can learn to craft you realize the depth of this game along with dinosaur taming/breeding and island exploration.

I’ll admit I’m late to the ARK party but that’s mostly because my catalog of unfinished games along with games I haven’t even started is longer than I’d like it to be so I’m usually hesitant to buy new games. What officially sold me on ARK though was the ability to rent a dedicated server for console games.  A fellow Frankenculture member and I were having fun playing Minecraft but we didn’t always have the chance to play together making starting a world and building together very difficult. Nitrado came to the rescue in that aspect allowing you to rent a server for PC and XBOX players alike allowing you and your friends to play in ARK’s world without the main host having to be on at the same time. My 10 person server is costing me $13 dollars a month which is the base option with larger servers available at a higher cost.

With already 50+ hours into ARK there’s no looking back.  I find myself spending my days dreaming of building up my sweet fort and wondering if the dinosaurs I’ve tamed think about me as much as I think about them, preparing to explore the dangerous island and getting to do this all with my friends is very exciting! If you reading this are looking for a new game to play I very much recommend ARK: Survival Evolved to be added to your game catalog as well.