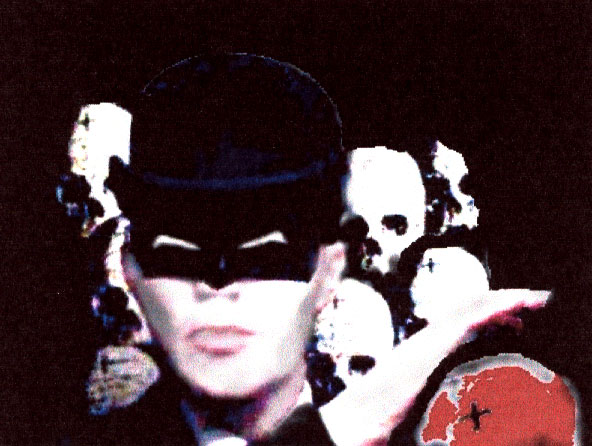 Hey y’all, David Shoemaker here, and at Frankenculture, we love and support all that is “indie” or “Underground”, so I put my feelers out there for some underground bands and artists to listen to.

I, personally would describe Gnostic Gorilla music as sounds you would here in an dark underground night club in either London, Paris, or New Orleans. Honestly, I imagine his music being played in goth club scenes in either the movies, Blade or Underworld. I personally dig it, because my tastes in music covers almost every genre out there. I would put Gnostic Gorilla up there with artists like Cabaret Nocturne or Perturbator.

Where and how did your project “Gnostic Gorilla” originate?
As a high school student in Southwestern Ontario, Canada (near the US border—Detroit) I
first pursued a recording project and just used the name “Dean Mason”. Some great
musicians joined me in the studio in London, Ontario (SRS) and we recorded “Dark
Hallway/Golgotha” and released this single using the homegrown label name “Lonely
Ghost Productions”. (thanks to my parents who helped me out with a bank loan) Then in
2012 I decided to look into recording electronic music with a Gothic/Dark Wave/Industrial
bent and in 2015 I dared to release my first album with “Gnostic Gorilla” as the project
name …and “LGP-ONE” as the indie label. That album, St. Basil’s Asylum was rereleased by
Cleopatra Records in 2018.

What does “Gnostic Gorilla” mean? How did the name come about?
“Gnostic” means ‘knowledge’ or ‘to know’. (roughly) “Gorilla” is an ape. The name is a
reference to two different worldviews merging…the religious view of ‘creation’ and the
‘Fall’ (you know, the tree of knowledge’) and then the other worldview…the Darwinian
theory of evolution, hence the ‘ape’. “Gnostic Gorilla” is not about ‘Gnosticism’. At first
my project name was The Lonely Ghost Project but I discovered there was a band in the
US called The Lonely Ghost Parade and so, I decided to change the name of the project
to avoid confusion, even though I was using The Lonely Ghost since I was in high school.
Originally, Gnostic Gorilla was the name of one of my songs, which is now renamed Eye
For a Lie “

How would you describe your writing process, when it comes to music and lyrics?
First I lay down some basic tracks starting with some beats/drum samples and bass lines
or synth lines or what have you and then I build from there. I begin with a general idea of
what kind of track I want to record and often it ends up taking a life of its own. I write
lyrics after I have most of the music recorded and then experiment with different vocal
styles. It can take a lot of different attempts before I decide on the style of vocals that
best fits the song. I’ve had situations whereby I had to totally rewrite the lyrics or
eliminate some of the lyrics because it sounded too ‘windy’ or whatever. Then, I choose
the title based on the mood and/or one the key lines/ideas in the lyrics.

What artists and bands are your biggest influences?
My own style of music is in the tradition of Ministry, Skinny Puppy, Type O Negative, Alien
Sex Fiend, Bauhaus, Rammstein, and other industrial ‘Gothic’ bands/artists. That said, my
earliest ‘inspirations’ would be Gary Numan, Japan, KISS, Sabbath etc. I will always see
The Doors as one of my favourite bands. I also owe a great deal of thanks to Nash the
Slash who has inspired me not only in the style of music I do, but more in the approach
(philosophy?) to being an indie artist.

What album inspired you to pursue recording?
I think the album that first blew me away to no end was Replicas by Gary Numan. My
entire view of how music could be… changed with that album! Especially the track, Down
in the Park. Tin Drum by Japan also blew me away!

What is your favorite song you have ever written? Do you have a favorite?
Man. I have a hard time answering that. I think one of my favourite songs is Winter’s
Mourning and I almost hesitate saying that because it is very much unlike most of the
other songs I have recorded. That said, it’s quite personal and means a lot to me. Also, in
that song I sing in my more natural voice as opposed to a screeching nut job. Hahahaha
The song sounds like Johnny Cash singing for Bauhaus.

What is your ultimate goal, as it pertains to your project? Fame, or for the art?
Definitely not ‘fame’. I say that because to fantasize about being ‘famous’ in this day and
age is a major set up to be disappointed and besides, there is something fickle about that
mindset. It’s absolutely and positively about ‘artistic’ pursuit. If people like it, great…but
the kind of music I do is quite underground so…I’d be a fool to think I am going to be on
The Top of the Pops or whatever.

Where can people go, to check out your music? social media etc.
Most links are available at the official website http://www.gnsoticgorilla.com but I will
provide links for Face Book https://www.facebook.com/gnosticgorilla/ and Band Camp:
https://gnosticgorilla.bandcamp.com/ and for the official vide for St. Basil’s Asylum
which features Damla Bozkurt on violins
https://www.youtube.com/watch?v=uAp9u64fHj4

What is the one thing you want people to take away from your project??
I hope they appreciate the honest effort of a tormented soul trying to express something
of the human struggle in the form of music.