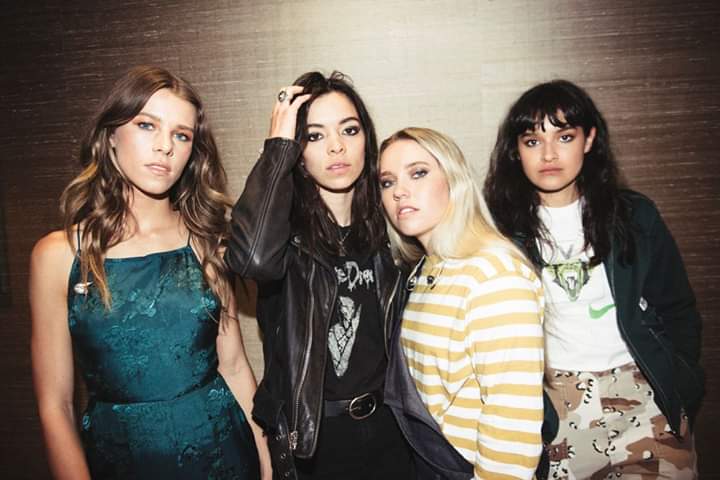 Guilty pleasures don’t exist in the world of David Preston Shoemaker,when it comes to music, if it sounds good then I am not ashamed to say I like it. My musical taste expand from Pop, Rock, Metal, to Hip Hop, R&B, EDM, and even Country. Music is both, magic and a drug. Marilyn Manson once said “Music is the strongest form of magic”, if that is the case, then Utah’s own, The Aces, are spellbound, and I am the warlock junkie fan who is hooked and can’t get enough!

The Aces are an all female indie pop rock band, based out of Provo, Utah. The band consists of members, Guitarist Katie Henderson, Bassist McKenna Petty, drummer Alisa Ramirez, and lead vocalist/guitarist Cristal Ramirez. According to the band’s Facebook, the band was formed in 2008 by all four current members while still in school. Now before we go any further, it must be noted that this ain’t no Disney band, this ain’t just another band of pretty faces pretending to sing and write music. These four ladies can write and play music like nobody’s business and look good while doing it too. The band has two releases on Red Bull Records, an EP named I Don’t Like Being Honest, released circa 2017. The Aces second release, is debut album When My Heart Felt Volcanic, which is the main focus on this article of What’s Spinning Me.

When My Heart Felt Volcanic was released earlier this year in April, marks as the band’s first full length. The album is a 13 song journey of emotion, heartbreak, falling in love, repetition, and self reflection. What particularly sticks out about this album, is the throwback aesthetic. Every song serves a purpose from start to finish, the colors, and art direction give off a vibe that goes with the mid to late 80’s sound mixed with some 90’s alternative and the current Indie/Alternative sound. I can’t pinpoint an exact artist or band, but it sounds like the love child of Madonna, Cindy Lauper, The Bangles, The Cure, and The Cranberries.

The lead singles off of the When My Heart Felt Volcanic, are Fake Nice, Volcanic Love, Lovin’ Is Bible, Just Like That, and Waiting For You. Music videos were made for the songs, Volcanic Love and Last One, the latter being directed by drummer, Alisa Ramirez. This album captures moments of all emotions the human anatomy can offer, if your body isn’t moving to music then your voice is singing along to the words. The Aces have recently ended a tour in which they were support for the band Five Seconds Of Summer. The Aces will be starting their first headlining tour come February 2019. The tour will be named the Waiting For You Tour.

Now, as you may notice, the list of cities The Aces’ have listed for their first upcoming headlining tour, there is no Vegas date. There are many gifts and curses to living in Las Vegas but one of the bigger curses, is having almost all your favorite artists or bands skip over Sin City. All is forgiven though, I might just have to make another trip to Los Angeles to check out The Aces live. That being said, onto to my own personal thoughts about this record. As a writer, my favorite part about music, is the words. Sure, the music is great but it’s not magic without some well written lyrics to go with it. One of my favorite lyrics on the record, comes from the song Hurricane, “ I hope you would wish that I was happy too/ Not askin’ you to hold my hand while I break you in two.” As you can guess, Hurricane, is the “Sad Girl Hour” song also known as the ballad on the WMHFV. Another set of lyrics worth mentioning, comes from the song Stay, “Don’t give me a reason to be older than my feelings for you, for you./ Cause I don’t need a reason to be feeling what I’m feeling, I just do, I just do“. I could sit here all day and quote all my favorite lyrics on this album but I would end up quoting the whole thing! These four young ladies have been getting a whole lot of traction in 2018, as they should, because in my honest opinion they are one of the hottest Alternative rock bands in the scene right now. I rate this album five out of five spins, the highest ranking any album can get in a What’s Spinning Me article. It receives a perfect score because of its seamless journey from song to song, its lyrics, themes, and over all aesthetic. WMHFV is also a top contender for my 2018 album of the year. The Aces have currently been a band for 10 years and it’s only the beginning, WMHFV is just the seed of what’s to come. Be sure to check them out on tour in 2019!!!