Chances are you’ve already seen a lot of bull about “Venom”.  Hate has been spewed left and right all over the internet like a symbiotic tendril infecting everyone it has come into contact with.  Let’s take a spin around San Francisco and see if the hate is well earned!

Eddie Brock (Tom Hardy) is a gonzo journalist based in San Francisco.  His Viceland type reports are extremely popular in both their honesty and grittiness.    He is a stand up guy and always does the right (even if its wrong) thing.  His lawyer fiance, Anne (Michelle Williams), works for a big firm, and everything seems to be going right for the 30 something couple.  That is until Eddie is called into his editors office and assigned an interview with Zuckerberg-esque Carlton Drake (Riz Ahmed).

Carlton Drake runs the Life Foundation, a company that is coming up with new exciting ways to save the world, or move its population into space.  Ahmed’s Drake is extremely hate-able as his smugness oozes off the screen and leaves you with douche chills.  Especially when Eddie is interviewing him and brings up a recent crash that killed 4 astronauts and has ended with lawsuits.  His parting words to Eddie “Have a nice life” as he is dragged away by security guards lets you know “Hey, I’m an asshole.” Eddie loses everything, including Anne.  He is in a six month downward spiral to where even the bodega owner tells him “Jesus, you look like shit.”  Drake has essentially ruined his life in SF.  He notes earlier in the film that he wanted to move to SF from New York because of Anne, but she had reminded him that it was because he was run out after a controversial story for the Daily Globe.  Eddie is soon contacted by Dr. Skirth (Jenny Slate) who is having some ethics issues with what has been going on at the Life Foundation.  On that crashed ship that Eddie probed Drake about, there were four alien life forms (symbiotes) that Drake has now been experimenting (and killing) homeless people with.

She takes Eddie to see for himself the terrors of the Life Foundation.  Eddie films everything on his phone until one of the symbiotes leeches onto him.  He escapes the Life Foundation by kicking down doors, parkouring and running straight through a fence.  The movie takes off from there as we are introduced to Venom, the being now residing in Eddie.

I enjoyed the movie.  I went in with zero expectations and so should you.  The sound design was quite amazing as Venom yells in Eddies head (FOOD).  The back and forth between Eddie and Venom is refreshing as well.  As Eddie is a man with good intentions and Venom wants to eat peoples faces off.  The movie is rated PG-13 so don’t go expecting the blood and …… carnage of a “true” Venom movie.  It is not hindered by this as you are left to you imagination when faces are being eaten.

There is some bad.  Michelle Williams is not likable, and the team of her and Tom Hardy seem to have very little chemistry.  Her hair also through the movie is extremely odd, and doesn’t change (what person gets a new boyfriend after a break up but doesn’t change hair styles?!).  Even in vacation photos her hair is exactly the same.  Hardy performance isn’t without it’s hiccups either.  His “Brooklyn” accent is odd and misplaced where it seemed like he was doing a Benicio del Toro impression.  This is compounded in the unbelievableness of him being a journalist, (I’m one to talk) as he mumbles his way through interviews.  He is likable, and again the chemistry between him and Venom is quite good.

I’m not going too deep into spoiler country with this as I want you to expierence the film for yourself.  It’s a fun action movie, with a slight tinge of horror mixed with a comic book.  The origins of some of the characters being changed doesn’t bother me either, as a lot of origins won’t make sense in today’s world/ society. The Zuckerberg villain makes you start to worry about the real Zuckerberg and what he is doing all day down in that lab of his.  Also the first after credit scene is amazing, but don’t wait around for after the credits (which goes for about 10 minutes) if you don’t care about Spider-Man: Into The Spider-Verse. 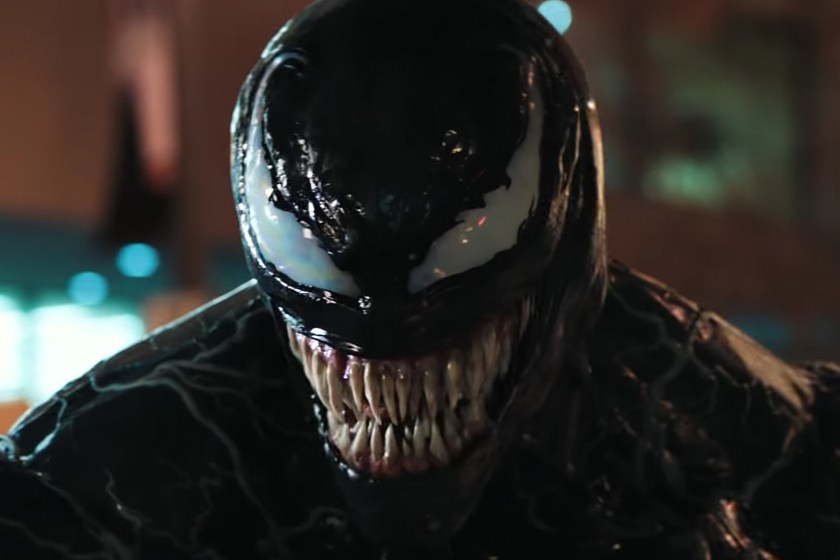