Ride into the Danger zone with “Radical Heights”

Early this week Boss Key Productions front rolled its way into the Battle Royale scene with the release of its newest title “Radical Heights” Like all other competitors, it has a set simple goal, Survive! 100 players step into an arena but only one comes out alive. The core mechanics in Radical Heights like other Battle Royale games remain the same but there are quite a few things that set it apart from the rest.

Most notably the Radical 80’s theme! The game is set in the style of an 80’s death game show à la Schwarzenegger’s 1990 masterpiece “The Running Man” Not much is explained yet but the initial game cut-scene hints at Radical Heights being an escape from your boring job or a shortcut to riches, if you survive that is.

The past few days I have spent limited time playing but in all honesty it has all been very enjoyable. It is difficult not to compare it to the power houses that are PUBG and Fortnite at the moment but also not fair, as early as it is there is plenty there to give you a different experience.

For me the maneuverability of the game is outstanding, you have full control of your character and you can feel the difference, When you enter a shootout it feels good, you can go full force at your opponent, use the environment if needed or even tumble away if you feel outmatched but usually the more skilled player comes out on top. There is no safety net of randomly putting up a wall for cover out in the open, if you are caught out, you are usually done for, which to me feels right.

Gun play is good but still needs work, it feels simple but still effective, tool tips show equipment stats to familiarize and explain what the item does, not only that, the varied guns feel different from each other quickly letting me know what loadout I was after.

Visually the game is mediocre at best but that is to be expected and clearly explained everywhere, the game is in early access so lots of textures are missing or even place holders, building interiors are essentially all the same unless you enter a burger joint or arcade. In the later parts of the match the map does seem bland and barren except for the random present drops which are plentiful, the lack of ambient sound can be off-putting and kind of pulls you out of the experience from time to time but again I am sure it will be addressed. Random bugs will pop up here and there but I personally have yet to experience anything that would hinder gameplay. 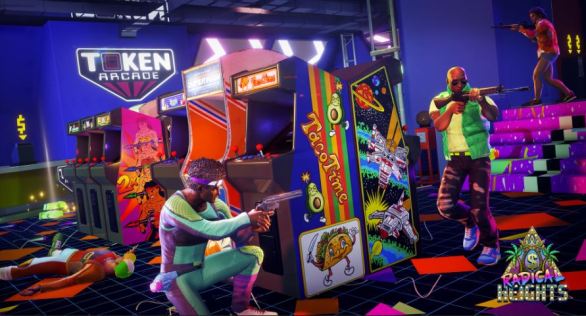 So far the game has surpassed all of my expectations (granted they were somewhat low) I can honestly recommend this game to anyone looking for something fun to play and have a good laugh, Boss Key Productions also went the Free to Play route so there is really nothing to lose, The cosmetics vibe really well with the game’s theme allowing me to get that awesome mullet of my dreams, I cant wait to see what else they release. The community behind this game and developer involvement has already been excellent with Boss Key addressing a founder’s pack issue HOURS after the game’s announcement. I look forward to spending more time with this game as its future does in fact look Radical.

Oh! Did I mention you get BMXes and you can take them off sweet jumps?! Wicked.

View all posts by RollDee