If you’re reading this then you must know there was a new Star Wars trailer that premiered earlier this week. Let’s dive in!

Lets begin with something that I’m sure the most casual moviegoer can draw a parallel from the Original Trilogy:

Everyone remembers in The Empire Strikes Back the epic “Battle of Hoth” with the Imperial Walkers making short work of those pesky Rebels, but do you also remember them making an appearance in Attack of the Clones?

There is a simple storytelling device that many viewers don’t pick up on called Screen Direction.  One example of how Screen Direction is used in film is whenever a Hero/Good Guy/Gal is on their journey, they typically go Left to Right of the screen as the story progresses as if you were reading text in a book. It’s the way our mind works. In “The Battle of Hoth” the Imperials are going Right to Left because, they are the bad guys opposing our Heroes. So why mention Attack of the Clones in a trailer analysis for The Last Jedi?

In Clones, Lucas purposefully (and yes there’s proof) flopped the perspective of the battle by having the “Army of the Republic” on the Right and “Separatists” on the Left, foreshadowing the eventual betrayal of the Clones, leading up to the fall of the Republic.

So whats up with the First Order being on the left side of the screen?

This is a small but significant detail that could tell us a lot of what’s to come. Someone like Rian Johnson, who understands the visual language of film, could use these cinematic tools to subvert our expectations.

Another great image from the Prequel Trilogy is in Revenge of the Sith, when Anakin Skywalker, now knighted “Darth Vader” marches on to the Jedi Temple to eliminate the “Enemies of the Republic”. The moment is beautifully illustrated from a “birds eye view” shot.

In The Last Jedi trailer we see a similar shot of Kylo Ren marching (limping?) in what looks like a cave on the new planet “Crait”. This salt covered planet has an old Rebel Base located there and the Resistance has set up shop there to prepare for whatever the First Order can throw at them.

While he was making his own two trilogies, George Lucas said many times the “Star Wars” could be viewed like a poem and in that each stanza should rhyme. Each film in their respective trilogy will have similarities.(Something that J.J. Abrams still gets flack for from The Force Awakens being too similar to A New Hope) Moving forward into this new era, it seems that the filmmakers have followed that example perfectly.

… to the obstacles our heroes have to endure… 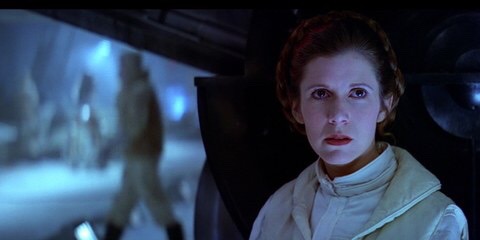 Ok so that last one could be a huge misdirect from the trailer but lets face it, if he’s not extending a hand out to Rey, he could still be extending out to Luke, or Leia, or even Maz! (Maybe not Maz) With the look of pure vulnerability on his face, he is showing a side of himself that he would more than likely never show anyone in the First Order, least of a Snoke.

My personal theory is that the shots in the trailer are most likely from two different sequences but that doesn’t mean that he’s not extending a hand to Rey.  She may look different, or hurt and thats what Lucasfilm doesn’t want to spoil to the audience.

So how do you move forward in this franchise? I believe the way this film ends is Rey and Kylo go off together to find the “Balance of the Force” within each other. Of course this could also be sneaking into Episode IX territory but I think its time to show by the end of this trilogy, the concept of the “Grey Jedi” actually be the focus thus putting an end  the Light and Darkside.

“Its time for the Jedi to end”

“Balance of the Force” would make a great title for Episode IX by the way. That was the working title for The Phantom Menace. It could bring it back full circle…

The last thing I’ll point out is the similarities I’ve noticed with the iconography in this trailer. The imagery seems to be “ryhmeing” the third part of the trilogy; Revenge of the Sith and Return of the Jedi which leads me to the most exciting question, if this is the territory The Last Jedi is tackling, how is this whole trilogy going to end in Episode IX?

This is a fun one.

This isn’t a confirmed homage but there is a strong resemblance from this shot of Captain Phasma squaring off against Finn, to the very popular paintings from artist Christian Waggoner.

Check out his work at: http://www.christianwaggonerartist.com

Let us know what you think? Do you agree? What do you think of the “Screen Direction Theory”? The only thing I can hope for is maybe you’ll walk away with a better appreciation for the Prequels after reading this column. It could happen.