If you’re anything like me, first off you’re awesome, but secondly you grew up in what we call the “attitude era”.  Your Monday nights were full of crotch chops, middle fingers, air guitar-ing on a big gold belt and wondering who’s side Sting was really on.  What Happened When (WHW) is an amazing podcast from Tony Schiavone and Conrad Thompson, that covers the World Championship Wrestling side of the Monday Night Wars. 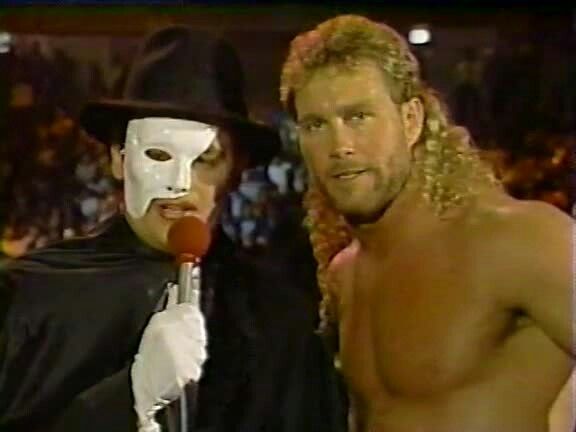 WHW started in February and QUICKLY found its grove.  Listening to Tony and Conrad is like listening in to two old friends chat about old times.  For those that don’t know Tony Schiavone was the voice of WCW. He was the head announcer sitting next to the likes of Mike Tenay, Bobby Hennan, Larry Zbysko and Scott Hudson.  The dude was THERE for all the craziness of WCW.  From when things were great to when it was going down in flames.  He pulls zero punches on his opinions (See “nothing going on” Evan Karagias or *ahem* Debra McMichaels) and is extremely informative.

Conrad drives the ship as we cover a PPV from each year starting with 92′ but going back in random episodes to ’88!  Each week on their Twitter, they throw up a poll to see which PPV you want to hear them talk about. We go match by match as Conrad asks Tony his thoughts on each, which sometime open a can of worms you didn’t expect (Tom Zink).  As Conrad goes through the matches or events transpiring, he’ll read what was being written by Dave Meltzer in the Wrestling Observer newsletter.  As you go through episode by episode Tonys anger toward Big Dave’s opinions boils to the top, until Tony musters a hardy “FUCK DAVE MELTZER”.  You will look forward to these moments as much as when they talk about Klondike Bill and Rey Mysterio Jr.

Again in you were a child of the 90’s and a teen of the 00’s you will throughly love this podcast.  Being reminded of a Meng VS Hacksaw Jim Duggan Karate match or how Vince Russo actually named a gentlemen General Hugh G Rection, each week, will make you yearn for a time where we didn’t have three hour Raws.

Check out the MLW page to give a listen, or download on iTunes